Don’t Monitor Your Network Without FPGA Acceleration by Accolade Technology

Software Alone is Not Well-Suited or Efficient for Packet Processing at Line Rate, but an FPGA is Ready and Willing 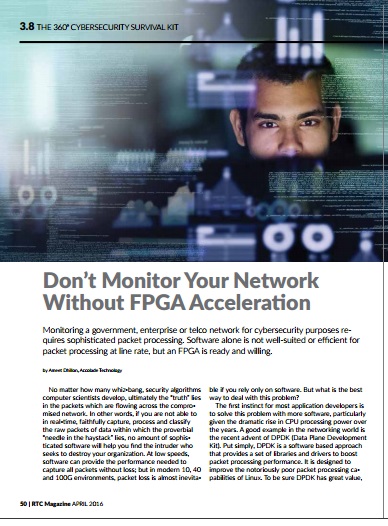 processing. Software alone is not well-suited or efficient for packet processing at line rate, but an FPGA is ready and willing.

No matter how many whiz-bang, security algorithms computer scientists develop, ultimately the “truth” lies in the packets which are flowing across the compromised network. In other words, if you are not able to in real-time, faithfully capture, process and classify the raw packets of data within which the proverbial “needle in the haystack” lies, no amount of sophisticated software will help you find the intruder who seeks to destroy your organization. At low speeds, software can provide the performance needed to capture all packets without loss; but in modern 10, 40 and 100G environments, packet loss is almost inevitable if you rely only on software. But what is the best way to deal with this problem?

Resolve all your host CPU offload bottlenecks. Share Your Technical Requirements with our FPGA and software experts to tailor the optimal solution. Accolade offers a 60 day free product evaluation for qualified customers to fully test and evaluate our products.

Thanks for signing up!