Eliminate All Your Host CPU Bottlenecks

Each packet that enters an ANIC adapter is tagged with a timestamp with up to 4nS (nanosecond) time precision. The ANIC adapter has to be disciplined from a timing source and there are five options as follows listed in order of popularity:

An ANIC adapter can also parse out a Gigamon or Arista generated timestamp and propagate it forward to the host application.

Data coming into the ANIC on different physical ports (e.g. 4 separate 10G ports) can be optionally merged together into a single (in timestamp order) combined stream of data packets. This is often required when an application needs to analyze both the receive and transmit directions of the same connection, but the data from the respective directions comes in on different ANIC ports. Once data is merged together, the host application can still determine which physical port a given packet came in on based upon a packet descriptor (metadata) that is provided for each received packet.

Packets can also be merged into a single stream from ports on different ANIC adapters. This merge is accomplished either via an external cable or the “card-to-card” bus available on each adapter.

If a host application does not require analysis of all packet data in its entirety, packet slicing is a perfect solution to limit the amount of data that an ANIC adapter presents. Examples where this functionality might be relevant is for traffic engineering, billing or protocol analysis type applications. Packets can be optionally sliced to include no packet data at all (only packet headers) or any arbitrary number of bytes, for example just the first 128 bytes of packet data. Different byte slice lengths can be assigned per port or a single value can be applied to all incoming packets.

Fragmented IP packets are identified and processed as if they were a single IP packet. For example, the fragments will be classified as the same flow and will be steered to the same host packet buffer.

Each ANIC adapter has a very powerful and flexible L2/L3/L4 packet parser. The header information from each packet that enters the system is extracted and processed to inform the host application about relevant packet details and also as input for packet filtering.

The parser is able to recognize various tunneling and encapsulation protocols such as VLAN, VXLAN, MPLS, GTP and GRE. The adapter is then able to intelligently strip away the tunnel encapsulations and analyze the relevant packet information contained inside the tunnel.

Each packet can be optionally compared against a number of pre-defined filtering rules. A rule can be defined to trigger on most any L2, L3 or L4 header field(s). The most common fields for filtering rules are IP address (source and/or destination), TCP/UDP port (or a range), protocol, VLAN id and MPLS tag. Rules can be defined so that they trigger on both sides of a bi-directional UDP or TCP session.

Once a packet filter matches, actions such as; drop, U-turn (local retransmit) or steer traffic to a specific host packet buffer can be applied to guide a packet along a desired path.

Most network monitoring appliances receive a significant number of duplicate packets; sometimes as high as 50% of all traffic. This is often because a SPAN port is configured to copy ingress and egress data from every switch port, which leads to duplicate packets for every packet that goes into and then out of a network switch. ANIC adapters can discard all duplicate packets in hardware before they ever reach the host application, thus saving a tremendous number of wasted processing cycles.

An ANIC adapter can optionally perform flow classification on each incoming packet. If this feature is enabled, information on up to 16 million unique flows is maintained in onboard memory as part of a lookup or flow table. For each new flow a unique “flow id” is generated such that the same id is calculated for both directions of a bi-directional flow. Information such as total packet count, total byte count and the last time a packet was seen is maintained for each and every one of the up to 16 million identified flows.

If flow classification is enabled, an ANIC adapter can be configured to filter out (i.e. drop) or filter in (i.e. only forward matching flows) the desired traffic flows. This capability enables security features such as blacklist matching. In addition, flows can be marked for steering to a specific host packet buffer(s).

At a high level, flow shunting allows an application to programmatically turn packet transmission on or off—for a given flow (based on 5-tuple). In other words, the application can decide from which flow(s) it does and does not want to receive data traffic. By intelligently “toggling” the flow shunting switch, an application can greatly reduce the amount of data it has to analyze, thereby freeing up CPU resources for more pressing tasks. 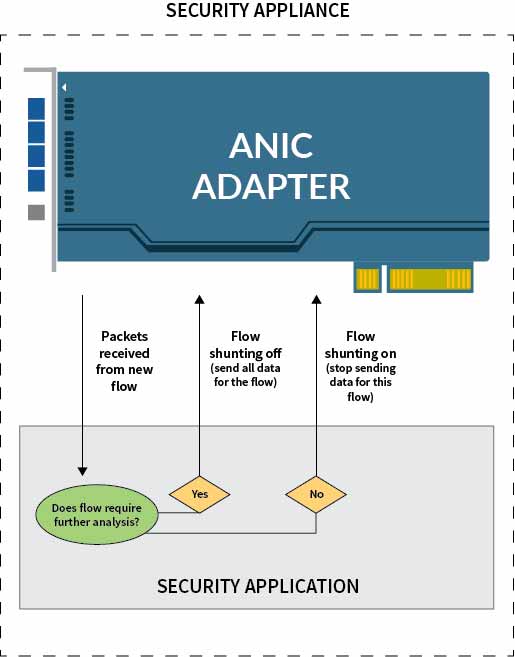 There are many reasons why an application may not want to continue receiving traffic for a given flow. For example, if the application cannot process encrypted traffic there is no point in receiving encrypted flows. Or an application may not want to examine video traffic (e.g. NetFlix) because it doesn’t pose a threat or wastes too much disk space, so all video traffic could be shunted away. Or perhaps the application has an IP blacklist (or whitelist) on which it operates and therefore any flows which don’t match the list should be shunted aside. The value of flow shunting is clearly that it puts control in to the hands of the application, so that dynamic decisions such as which traffic flows should be analyzed can be made based on programming logic.

In order to support multi-core CPUs and multithreaded host applications, ANIC adapters utilize a flexible host packet buffer (HPB) technique. Host memory is segmented into a number of fixed size blocks. The block size is configurable but is typically 2MB or 4MB each. A collection of these host memory blocks is then dynamically pooled together to form a host packet buffer. A specific application thread (often tied to a CPU core) is then explicitly assigned or linked to a given HPB and will only process data that is transferred into its own HPB. Up to 64 independent HPBs can be created (per ANIC adapter) and in turn assigned to up to 64 host application threads.

The memory blocks (typically 2MB or 4MB in size) assigned to a host packet buffer (HPB) do not have to be contiguous. In other words, each HPB is composed of blocks of host memory that are randomly spread out in various areas of physical memory. In addition, memory blocks are temporarily assigned to a given HPB by the ANIC adapter and once an application thread has finished processing all the data from a given memory block, that block can be assigned to a different HPB.

An ANIC adapter is configured to intelligently steer packets in to specific host packet buffers (HPB). The benefit of packet steering is that each thread in a multithreaded application (often utilizing multiple CPU cores) can process packets from its own HPB. In this way a security or networking application can take advantage of parallel processing of data thus achieving higher levels of speed and efficiency.

There are three different ways to steer packets into a HPB:

Packet traffic is typically transferred across the PCIe bus (DMA) for consumption by the host application. However there may be circumstances under which select traffic must be locally redirected or retransmitted out of one of the ANIC network ports. Packet filtering or flow classification can be used to identify which specific packets or flows must be redirected out a given port.

After all packet processing concludes, an ANIC adapter efficiently transfers all relevant packets and associated packet descriptors (metadata) across the PCIe bus directly in to host memory for consumption by the host application.  The main advantage of DMA is the host CPU is not burdened with memory transfer and hence is available to perform other more important tasks.

Multi-core DMA is a technique that makes processing by multiple host CPU cores more efficient. For example, assume the host Intel CPU has 4 cores (up to 64 cores are supported) with each operating independently of the other 3 cores. The ANIC adapter is programmed to write data in to 4 independent host packet buffers (HPB)  and each CPU core (and related application thread) is in turn programmed to process only its corresponding HPB. In this way a network security or monitoring application can take advantage of parallel processing of data thus achieving higher levels of speed and efficiency.

PF_RING is an open source, Linux kernel module for packet capture that is supported by most open source IPS/IDS solutions such as Snort, Suricata, and Bro as well as other applications such as Wireshark and Argus. PF_RING has native support for Accolade ANIC adapters which makes integration with any application that uses PF_RING seamless.

ANIC adapters provide all RMON1 (RFC 2819) related per-port statistics such as packets received, packets in error, dropped packets and broadcast/multicast packet count. The implementation also goes beyond the RFC to provide a packet count for various packet sizes ranging from the minimum 64 bytes up to and including jumbo frames (greater than 1518 bytes).